Early warning of autism in children as young as 18 months

A screening tool developed by Australian researchers can ­detect autism in children as young as 18 months with an ­accuracy rate of 96 per cent, transforming the options for early treatment of the condition by allowing much earlier intervention.

Currently the average age of detection of autism globally is four years. A study of more than 13,500 children in Australia validating the accuracy of the detection tool is groundbreaking because early intervention in ­autism, such as speech and physical therapy, is crucial to ­integration into mainstream ­society and education, and can reduce levels of disability by as much as a third.

The study, led by La Trobe University researchers and published in the Journal of the Amercan Medical Association, examined the efficacy of the ­Social Attention and Communication Study (SACS) method, which is currently used in Victoria and is based on repeated developmental observations of a child.

Maternal health nurses look for signs – often reported by parents and noticed at a very early age – such as failure by babies to make consistent eye contact, to smile, show their toys to others, point, to play social games and respond when their name is called.

The SACS-Revised (SACS-R) and SACS pre-school (SACS-PR) tools were tested in maternal and child healthcare centres across Melbourne ­between June 2013 and July 2018. Children identified as being at high likelihood of ­autism at 12-24 months were ­referred to specialists for diagnostic assessment.

For babies screened with the SACS-R tool between 12 months and two years, and identified as being at risk of autism, 83 per cent went on to have an autism diagnosis. When combined with the SACS-PR test the predictive ability to detect autism increased to 96 per cent.

The screening check, developed over the past 15 years, is ­already funded in Victoria and Tasmania. Researchers now want it rolled out nationwide and worldwide and funded for all preschool children.

“When nurses are weighing the children, measuring them and discussing things with the parents, they’re looking out for the child’s social communication and development,” said study leader Josephine Barbaro, research fellow at the Olga Tennison Autism Research Centre.

“They’re looking at how the child engages in eye contact, in how they copy other people’s ­actions, whether they engage in pretend play like feeding a teddy or giving teddy a drink. They look to see whether the child smiles at the nurse.

“What typically happens is that parents identify that their child is developing differently from other kids. They may notice that they child is not using words like other children or is not engaging in the same way as other children and then they raise these issues with their doctor and they’re often told to wait and see.

“But it’s really critical to have children on the spectrum diagnosed as early as possible so that they can access the supports and services that they need.”

Recent research has indicated that if children are identified ­earlier and receive early intervention therapies, they demonstrate increased verbal and non-verbal cognitive abilities, have increased participation in schooling, and do not need as many supports as they got older.

A study published last year found that if children identified as being at high risk of autism ­received six months of therapy from 12 months of age, at 18 months of age they had acquired 17 more words in their vocabulary and understood 37 more words than children who had received no intervention.

La Trobe researcher Kristelle Hudry, who led that study, said the benefits of just six months of low-intensity early intervention continued to stretch into childhood. “What we found is that of the ­infants who were meeting the SACS criteria at 12 months of age, when we provided them with six months of intervention, they had better communication and language skills and we found that those communication and language skills continued to be ­improved 18 months later.”

Shafica Berjaoui’s eight-year-old son Ayoub was identified by the SACS-R tool as being at risk of autism when he was 12 months old.

“He had zero connection, he didn’t want to cuddle, he completely refused breastfeeding, he wasn’t able to have that face-to-face contact as a newborn,” Ms Berjaoui said. “I have family members on the spectrum so I’m quite familiar with the signs.”

Following identification with the SACS-R screening tool, Ayoub was formally diagnosed at 22 months and was then able to ­access funding for early supports including speech therapy, ­psychology and occupational therapy.

“He needed as much therapy as possible to get him school-ready,” Ms Berjaoui said. “Through the therapy we got on top of a lot of hurdles related to his behaviour and he has better coping skills to help with sensory issues. Now he’s talking, he’s quite verbal.”

Ms Berjaoui said she would like to see parents around the country have the opportunity for earlier ­diagnosis. “I think the diagnosis process needs to be made a lot easier for parents,” she said. “The ­actual diagnosis process is very expensive, so I think a lot of parents shy away from it. You’re looking at about $5000 just for a diagnosis.

“Early intervention is so critical. Children are like clay when they’re young but as they mature their behaviours get set in stone.”

Andrew Whitehouse, a professor of autism research at the Telethon Kids Institute, said early therapies and supports were crucial to providing support to children at a time when the brain was developing rapidly. He said by identifying children with autism within the first year of life, levels of significant disability could be ­reduced by a third.

“I think that in the field of ­autism we have been working in ways that haven’t changed for 40 or 50 years,” Professor Whitehouse said. “There’s no doubt that we’ve been working in a way that doesn’t align with the evidence that has been spilling out of ­science. We now have all the of evidence that we need to develop a new and more effective clinical model to help children develop and support children across their lifetimes.”

Monash’s Yuming Guo’s paper in Top 10 climate papers most featured in
the media in 2021.

The Children’s Cancer Institute makes the front page of The Australian (and Sunrise, ABC’s AM and ….)

Every year, about 50,000 Australians die from cancer, and about half of those will be rare or less common forms.

Pro-Bono Client in the News – Fit to Drive Foundation

The Jose Polo Strategy Has Won Another International Award for TE+A.

The strategy which saw more than 2800 media hits, and not one alarmist headline, for Jose Polo’s research has been recognized by the world’sforemost creative awards

A suite of media assets (download) led to 2800 media hits including Washington Post, NBC in the US, The Guardian and four front pages in Australia – and no references to Frankenstein science. 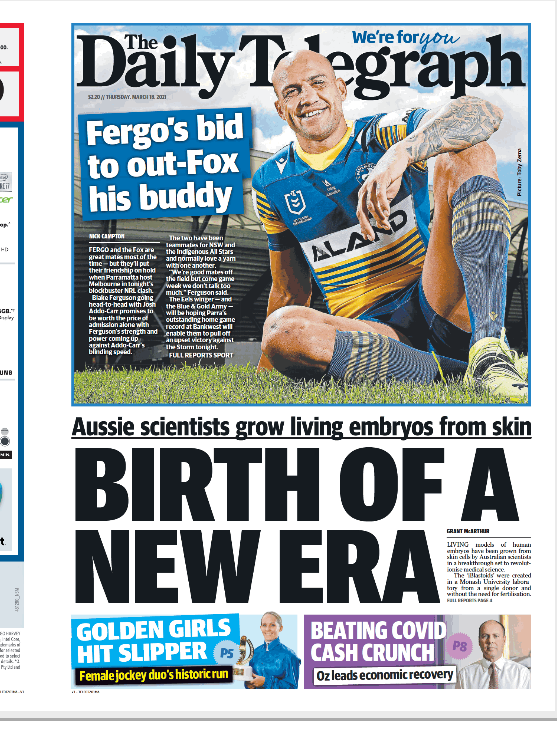 TARGETED MEDIA FOR THE COMMUNICATION OF SCIENCE